Today I got interested knowing latest Microsoft developments and it’s plan for future too. Few days back I was literally amazed with it’s new kind of PC, but I think what I read today is too later to read. It’s all about Office-12. Now although it’s not hot as a hot cheese pizza, though the new technique it realized is cool. RUI, it’s new mantra to be released yet. People who are haunted with WYSIWYG ( What You See is What You Get ), will soon be attacked by WYGIWYS ( What You Get Is What You See ).

Microsoft have taken pains to unveil it’s RUI technique which replaces the old Mac Style operations ,which gives menus, toolbars with buttons, which does specific commands. Many might not aware that Microsoft Office’s current versions is has 1000+ commands and rarely it’s been used.

Ok, ok, I haven’t said a word about RUI ( Result oriented User Interface ). Why we need to move to a new kind of Interface. Neilson list’s the disadvantages of WYSIWYG http://www.useit.com/alertbox/wysiwyg.html

One major breakthrough in this design is, Office wipes out it’s most of the Toolbars and Menus (thank god, there would be at least some space for my doc)

In the new version, even the graphics rendering is also been tuned up ( I think it’s the magic of Longhorn) to give a glassy, and shiny look which really gives a pleasant view of 3D objects. 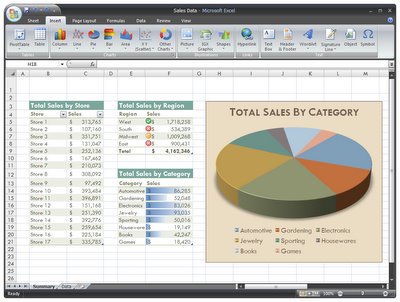 Also, I feel that with the new RUI, and the availability of the API’s for developing would bring loads of cools plug-in kind of things and interfaces.